This listing is being maintained by its rightful owner.

The Wimberley Mural is a special attraction in Wimberley, Texas. The owner of Hotel Flora and Fauna hired an area artist, Tony Sanservo, to paint the mural.  It reflects the flora and fauna of the Texas Hill Country.  A special clear coat process is used to seal the artwork annually.  It is a must-see attraction when visiting the area.  It is less than half-a-mile from Wimberley Square.

When the hotel was built in 2015, the wall that extends the full length of the property was specified as “masonry” on the building permit.  It was built with white stucco.  The building inspector said it wasn’t masonry, but of course, stucco is a form of masonry.  The owner thought about redoing it in some manner, but the white stucco was the design for the hotel.

So, the owner’s wife had the idea to paint a mural on the wall.  One small section of the 15-foot wall was painted.  Then one city official branded it as “graffiti.”  The wonderful artist’s community in Wimberley came out in full force to protect the art and the wall.  Tony Sanservo was then commissioned to paint the mural the entire length of the wall.

A few years later, the owner noticed the mural had started to fade.  Tony then painted it a second time, and he emphasized that the Hotel had to seal it twice a year.  The sealing process now takes place regularly.  Come see The Wimberley Mural.  The detail and the quality of the artwork are truly special. 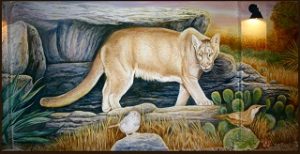